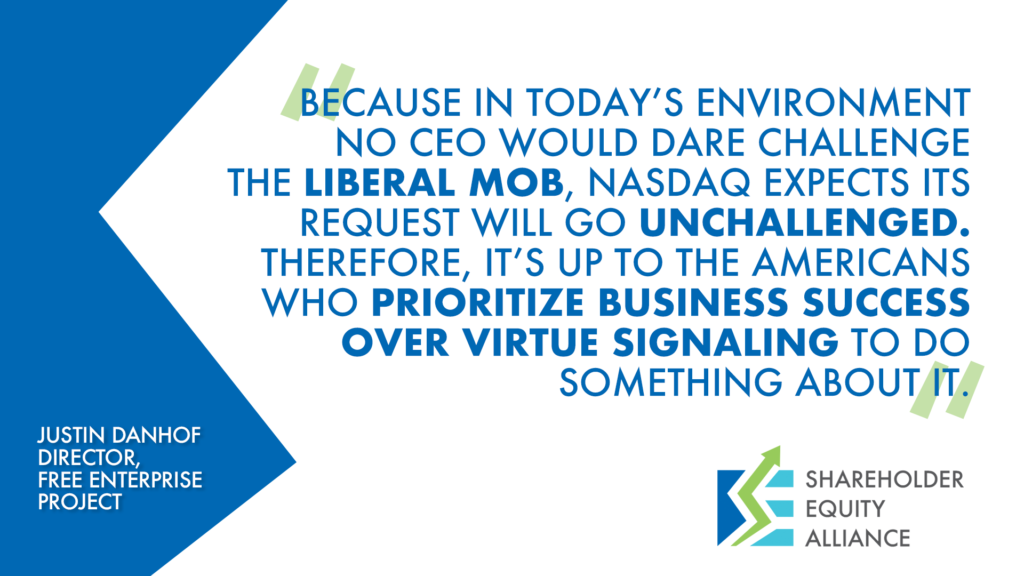 Nasdaq’s diversity quota made headlines for its prescriptive, centralized, and narrow definition of diversity. Justin Danhof, Director of the Free Enterprise Project at the National Center for Public Policy Research, called out the mandate. Not only is it illegal, it will adversely impact companies for years as they scramble to adhere to this arbitrary standard. Danhof makes the case that this proposal by Nasdaq is a “wholly unconstitutional” virtue signal that will “financially strain many American businesses.”

“Specifically, Nasdaq is seeking permission from the U.S. Securities and Exchange Commission (SEC) to delist any American company from its platform unless the company puts two ‘diverse’ individuals on its board of directors. One position must go to a female. And one position must go to a racial minority or a member of the ever-broadening definition of LGBT.”

Completely separate from financial performance, Nasdaq’s mandate is illegal. With employment in the U.S., companies cannot hire (or not hire) candidates because of their race or gender. Nasdaq’s latest ruse is demanding that 3,000 companies bring on Board directors based on this criteria.

“For starters, this scheme has precisely nothing to do with financial performance. In its petition to the SEC, Nasdaq doesn’t claim minority or female board membership leads to increased corporate performance. It simply cites debunked studies claiming that such board diversity is ‘positively associated’ with better financial performance. This confuses causation with correlation, a logical fallacy known as post hoc ergo propter hoc (‘after this, therefore because of this’).”

“So, if a company complies with Nasdaq’s demands, and ends up with a board comprised of one female and the rest all white males, the company just potentially (and publicly) outed one of those men LGBT. Surely not every single member of those groups wants that information made public.”

“Among the financial companies in the Fortune 1-100, the split was 83 percent Democrat and 17 percent Republican. Nasdaq is trying to fast-track the left’s complete takeover of corporate America by ensuring that board seats are now rewarded to leftists — thereby keeping any businessmen with conservative or traditional values out of the club.”

CEOs will likely not protest this new mandate for fear of becoming another victim of cancel culture. It is up to Americans to stand up to this unconstitutional, discriminatory and costly ruling.