Retail Shareholders: Take the Reins in 2021 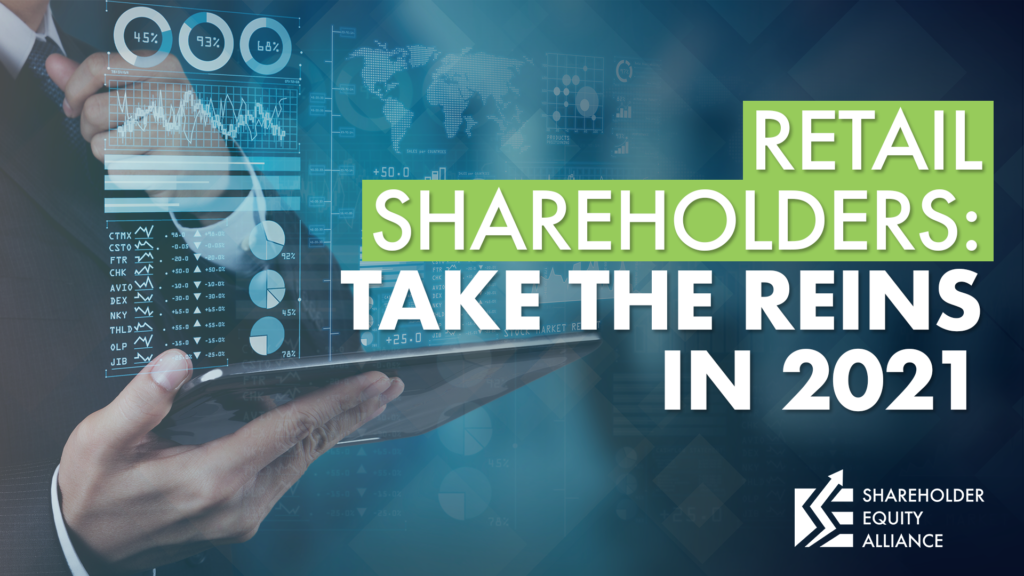 In the 2020 shareholder season, we saw some interesting patterns regarding shareholder proposals. Diversity and equity proposals flooded Big Tech companies. Activists pressured banks to divest from fossil fuels — despite several degrees of separation between Wells Fargo and climate change. Amazon alone saw a plethora of proposals ranging from viewpoint discrimination, to gender equality, to environmental responsibility.

According to a report from PwC, overall voting participation in 2020 was the highest it has ever been. As the 2021 proxy season quickly approaches, let’s review the key takeaways from 2020.

Shareholder support for social and environmental proposals increased from 25% to 27%, due to increased support from institutional owners in 2020.

434 shareholder proposals came up for a vote in 2020. Of those, liberal shareholder activist groups submitted 95% of the proposals focused on environmental, social or governance (ESG) issues. By buying up a minority stake in companies across the U.S., these activists then turn up the heat. They use political tactics to push corporate policy changes and sway business decisions according to their preferred agenda.

Shareholder activists push these changes through a multitude of channels. For instance, they might call companies out in the media or make threats of litigation. But their latest favorite is to submit and vote on shareholder proposals to enforce their demands from within.

Not only that, but these huge investors could be hurting your investments. By pushing changes that aren’t in shareholders’ best interests, institutional investors flex their muscle on “woke” policies. But their massive scope means they don’t experience any of the financial downsides of those policies themselves.

Key Takeaway 3: Many American Investors are 2 Steps Removed from the Vote

It’s common for fund managers to vote for proposals based on recommendations by proxy advisory firms. But guess who are the firms’ biggest clients? The shareholder activist groups who submit the proposals!

This results in many American investors being two steps removed from their vote. If you invest with a fund manager, it is important to tell them how you want to vote on your proxy for each proposal. Take your vote into your own hands and don’t give it up to the institutional investors.

As you receive proxy statements and links to vote in annual meetings, take the time to study the shareholder proposals. Retail shareholders have an opportunity in 2021 to show up like they haven’t in the past. If they vote, they can prioritize items that will throttle business forward and their investments upward. Become an engaged and informed voter in the 2021 shareholder season, and you’ll be a key to keeping these companies neutral, or bringing them back to it.