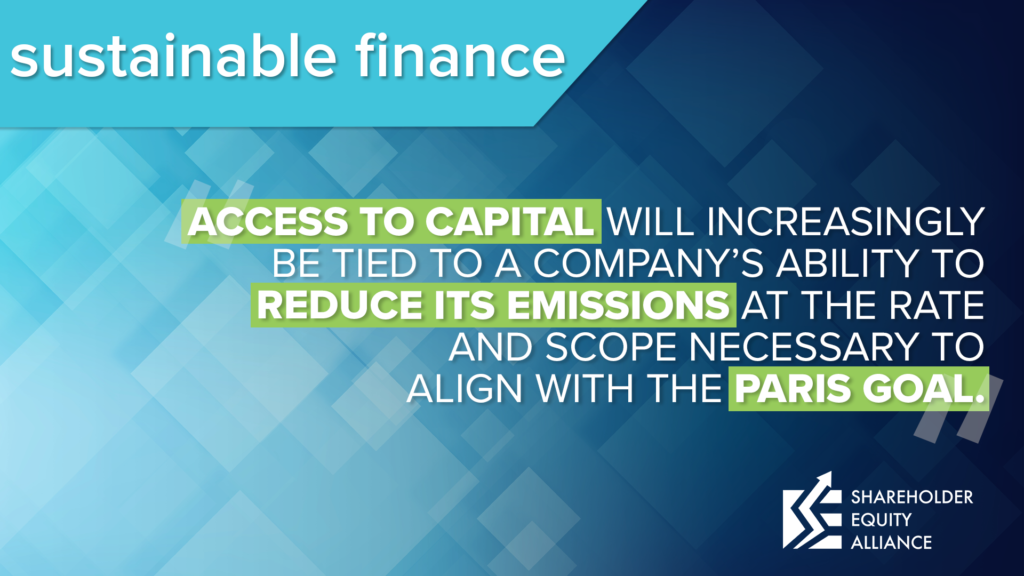 For the last decade, environmental and shareholder activists have been increasing pressure on companies to move towards sustainable finance and to divest from fossil fuels. Recently, those actions have spurred some major changes from big banks.

Morgan Stanley said they will take responsibility for greenhouse gas emissions from projects that they finance. Similarly, JP Morgan and Goldman Sachs announced they will stop funding Arctic oil and gas projects. They’ll also increase internal restrictions on the funding of fossil fuel ventures and spend more on sustainable projects. These announcements are the direct result of activist shareholder proposals from previous proxy resolutions, plus years of political pressure.

Moves like this fall under the umbrella of “sustainable finance.” Any financial service that integrates environmental, social and governance (ESG) criteria into its business strategy can claim this rationale. The foundational the principle of sustainable finance is that money should be used for good. At first glance, who would disagree? But in practice, banks use the umbrella of “sustainable finance” to accept responsibility for carbon emissions from organizations they are only tangentially related to. In effect, they then have carte blanche to increase fossil fuel restrictions on their own customers. That sets a chilling precedent for other banks and organizations.

Danielle Fugere is the president of As You Sow, a shareholder activist group. She recognized the bludgeon banks could play on companies who cannot reduce emissions at a speed acceptable to shareholder activists when she stated, “Access to capital will increasingly be tied to a company’s ability to reduce its emissions at the rate and scope necessary to align with the Paris goal.”

Some major banks will now base their decision on whether to partner with company on their success in reaching, or striving to reach, Paris Climate Agreement standards. These standards are not only almost impossible and deeply expensive; they also take years to measure improvements. And most importantly to shareholders, these changes often fail to improve the company’s profitability.

As with most sustainability-related objectives, political activists focus only on what should be torn down, not on its replacement. For example, banning reusable plastics requires an increase in paper products, resulting in more downed trees. What will the adverse effects be on the environment, economy, and your portfolio if fossil fuels are divested?

Banks should be able to invest and divest with an eye only towards their company, employees, and shareholders. If banks withhold capital, the end result should be job creation, a better work environment, and profitability. Sustainability, without these objectives, is unsustainable.

However, these banks appear to be making these changes only to appease the political activists yelling the loudest. Sustainability goals continue to be a moving target, and regulating by these ever-changing standards will prove to be a bad for business.