The Kind of Diversity That Matters 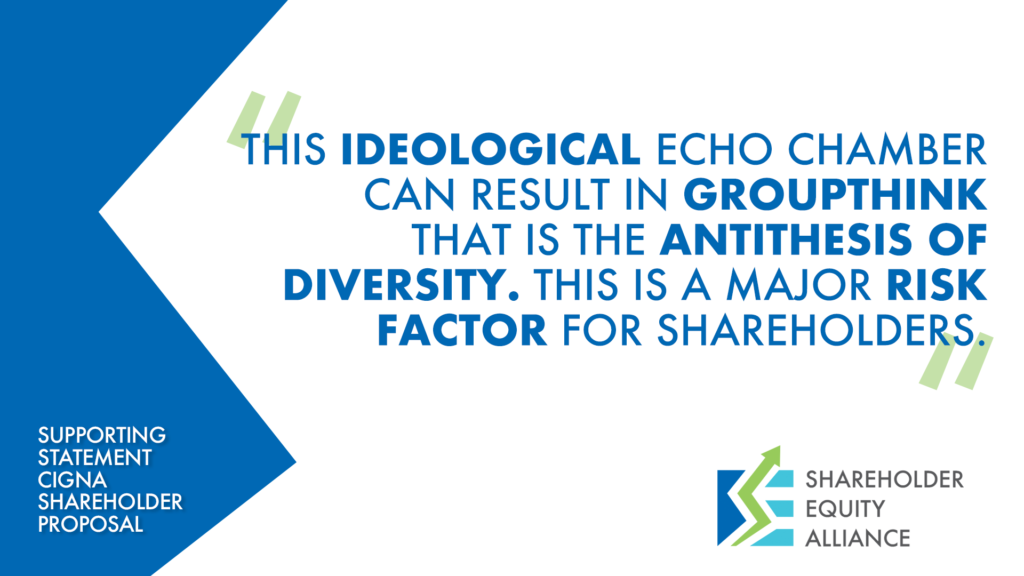 To be diverse means, simply, to be different. But in today’s mainstream corporate culture, there’s the “right” kind and the wrong kind of diversity. Diversity of race, gender, sexuality, class, and religion are, according to corporate executives, the “right” kind, the kind we should all celebrate. And they’re right: we should celebrate the things that make us different, because our differences make us strong. But diversity of political views? Which CEOs are speaking up for that?

Certainly not Cigna’s. In late April, Cigna held their annual shareholder meeting. Their 152-page proxy statement contained a wealth of information, including seven shareholder proposals up for a vote.

Proposal 7 requested that Cigna’s Board of Directors disclose the minimum qualifications that any Board nominee must meet. That includes each nominee’s skills, ideological perspectives and experience. The board unanimously advised shareholders to vote against this proposal.

So, why would the Cigna board of directors unanimously be against this proposal? According to Cigna:

“The skills, qualities, attributes, and experience that the Board evaluates when considering a potential nominee do not include ‘ideological perspectives’ because our Board does not believe that to be relevant to the Board’s oversight role or the nominee’s ability to serve as an effective director. … our Board believes this proposal is unnecessary.”

Viewpoint Diversity: Why It Matters

In short, a board’s core responsibility is to represent its shareholders’ interests. That means all of its shareholders, regardless of their skin color, gender, political or ideological beliefs. With the ever-growing rise of woke corporations pushing out conservatives and ushering in progressives, it is important to ensure that every shareholder is represented. The supporting statement of Proposal 7 notes:

“True diversity comes from diversity of thought. There is ample evidence that the many companies operate in ideological hegemony that eschews conservative people, thoughts and values. This ideological echo chamber can result in groupthink that is the antithesis of diversity. This is a major risk factor for shareholders.”

Diversity for the sake of diversity purports that every woman, veteran, minority and LGBTQ+ operates within a monolith. Not every woman thinks the same, not every minority shares the same experiences and not every single person who identifies within a minority class shares the same viewpoints, accomplishments and values. Diversity valuations should be considered on a much deeper and complex level than someone’s skin color or sexuality.

On the other hand, viewpoint diversity among a board of directors can be one of the most powerful tools of a corporation. Diversity of thought, experience, and ideological or political beliefs provides checks and balances to ensure that corporations stay true to their mission and far away from political agenda pushers. It also has the power to create a business that exceeds customer expectations and increases value for both the employees and shareholders.

Every corporation should fight for differences among their Directors that drive up business, revenue and shareholder value. A truly diverse board is a solid gauge of stable corporate governance and a well-functioning operation.